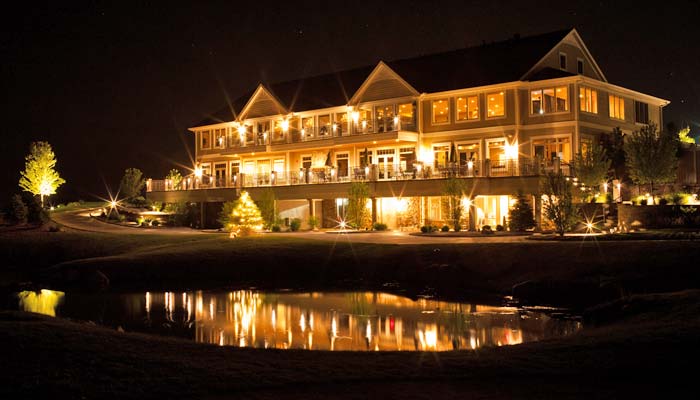 Before you even hit a single shot at Metamora Fields, you quickly realize that you are in for a first-class experience.

Upon entering the parking lot, you are overwhelmed by the beauty of the clubhouse and the impressive landscaping around the facility. Ponds and natural grasses surround the building and it is easy to see that no corners were cut or detail left unchecked. Only opened in the past two months, Metamora Fields promises to be the standard in the Tri-County area for years to come. Our first stop was the clubhouse which is visually striking on its own. With a beautiful restaurant downstairs and remarkable reception and meeting area upstairs, the interior decor is worthy of what you would see on a design show on television. Designed by Illinois’ own D.A. Weibring and built by Peoria-based Turf Solutions Group, we headed for the first tee on a particularly windy day for our review.

There is something for everyone at Metamora. Low handicappers will get all they can handle from the championship tees at 7,100 yards. Holes like the 603-yard 6th and 458-yard 18th will require premium driving distance. For us mortals, there are black (6,663 yards), blue (6,209 yards) and white (5,793 yards) to choose from which makes for an excellent variety. For ladies and juniors, the red tees at 4,939 will offer a challenging yet enjoyable experience.All the teeing areas were immaculate with plenty of area to allow for a variety of tee marker locations.

As previously noted, the clubhouse is nothing short of awesome. The pro shop is stocked with everything required for a great day of golf. The staff, headed by Jeff Roche (who is also the Bradley University men’s golf coach) is friendly and informative about the course. Having someone come and grab your bags and get you loaded up is a bonus I hope they will continue. The marshals (and even the maintenance staff) were helpful throughout the round helping first-timers navigate the course.  In addition to the golf, you should check out the menu (it’s online) for the restaurant. All the reviews have been very positive and the view from inside of the 9th and 18th greens is impressive.

Again, top-notch. Really nice driving range and short game practice area. Everything you need to get ready before a round. The practice putting green was sizable and ready to accommodate lots of players.

Vision and planning help couple shape the day of their dreams 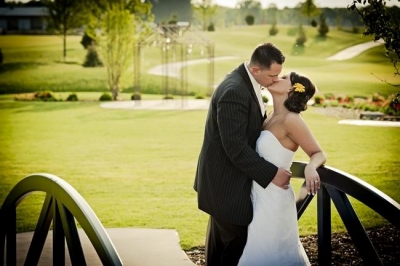 Erik and Amanda Perkins had very different ideas for their wedding. "I wanted a destination wedding. My husband wanted local," Amanda Perkins said. "We compromised with an outdoor wedding." They decided to have both ceremony and reception at Metamora Fields. The planning required as much imagination as it did logistics; the large clubhouse wasn't even built when they booked it.

"It was just dirt and frame when we visited," she said. "But they really gave us the plans and the vision. I really trusted them." Even the menu was a leap of faith for the Peoria couple. The first meal they ever ate there was at their reception. The Metamora Fields catering staff cheerfully made suggestions when Amanda decided she didn't want a traditional menu.

"We got married Memorial Day weekend. And with it being outside, I thought 'Hey, how about barbecue,'" Amanda said. So after the outside ceremony, the guests filled the new ballroom on the second floor of the clubhouse and enjoyed macaroni and cheese, Jamaican jerk chicken and pulled pork. It was a huge success. "Everybody who was there ranted and raved about the food," she said.

Amanda also ditched the traditional wedding cake. Instead, guests were treated to a lavish display of brightly colored cupcakes. That kind of customizing is par for the course, according to Lisa Miller, director of events at Metamora Fields, which opened for business Dec. 1. She's seen quite a few brides opt out of traditional wedding cake and instead ask the Metamora Fields chef for something special.

One bride next month will be serving each guest mini desserts in little parfait cups. An October bride who is using a fall theme will have pumpkin bars, apple pie and caramel apples at her reception. The personalization doesn't stop at the menu, Miller said. The banquet hall has yet to look the same for two receptions. "The decor is neutral. So what we're seeing is every bride who comes in really makes it her own," Miller said. "It's like an artist with an open palette. "I tell the brides all the time, 'You can put your signature on the day.'"

Amanda was the first bride to book at Metamora Fields. She found she was a little out of her element when it came to finding other vendors nearby, and wasn't sure an untested staff would be able to make recommendations. Not only did the Metamora Fields wedding coordinator suggest vendors for the cupcakes and flowers, but she also arranged a meeting among Amanda, herself and the other vendors, so everything would be coordinated for the big day. "They all worked together," Amanda said. "It took a lot of stress off me."

The ballroom can seat 350 guests or can be divided for smaller weddings. Brides and grooms can choose not only their decor, but how they want the reception laid out. But one of the most enviable facets of the decor comes courtesy of Mother Nature. "Three sides of the ballroom all look out on the golf course," Miller said. "One side faces west, so you get these wonderful sunsets. It's truly breathtaking."

For Erik and Amanda, who had never visited the facility at night before their wedding, the sunset made for some of their best pictures and memories. "People really need to see the view and the windows up there," Amanda said. "Daytime, nighttime. It's gorgeous."

Dan Budzius grew up in Dwight and spent most of his summers hanging out at Dwight Country Club. He knows what it means for a small community to have a golf course readily at its disposal. “It can make a huge impact on junior golf and kids not only in golf, but what the game of golf in general does for you,” he said. Budzius, who helped Dwight High School capture the 1980 Class A State title and later played at Illinois State, believes Jim and Carol Ring are bringing that same feel to this Woodford County town with some help from another Redbird golf alumnus.

Metamora Fields Golf Club, owned by the Ring family, is set for a July 11 grand opening. The 18-hole course was designed by D.A. Weibring and his Dallas-based firm, Weibring-Wolfard Golf Design. It is located two blocks north of Illinois 116 across the street from the city pool. A spectacular-looking 25,000-square foot clubhouse, complete with a full-scale restaurant and banquet facility, opened in December.

Budzius is president of Golf Resources Group, a management company in partnership with Weibring-Wolfard Golf Design. He is serving as Metamora Fields’ general manager as Golf Resources gets the course up and running. “Dan understands that small-town, small-community atmosphere up there,” said Weibring. “He’s spent a lot of time up there getting them geared up and ready to go. They’re off to a great start.”

Weibring’s former ISU teammate, Bill Kirkendall, is Golf Resource’s chief executive officer. Another ISU graduate, Jeff Roche, will serve as Metamora Fields’ director of golf. Roche was an assistant pro at ISU Golf Course from 1992-95 and has been Bradley’s men’s golf coach since 2006. When the Rings sold their family business, National Wheel-O-Vator Co. in Roanoke in 2008, they decided a golf course with an upscale clubhouse might be a good thing for Metamora. Never mind that the Rings were not golfers. The Rings were referred to Weibring, whose company built TPC at Deere Run in the Quad Cities and did the renovation for the ISU Golf Course in 2001 (the course was renamed Weibring Golf Club at Illinois State in 2007). After playing in a Champions Tour event in Des Moines, Iowa, Weibring drove over and met the couple at the McDonald’s restaurant near the 195 acres of farmland the Rings eventually purchased.

Weibring encouraged the Rings to do a feasibility study to see if the area could support such a project (which will include a 102-lot housing subdivision), especially with the soft economic conditions for golf courses. “They were pretty much committed,” said Weibring. “When you see a property like that you think links because it didn’t have trees.” Work on the course began in 2009 with Turf Solutions Group of Peoria providing the construction. Thanks to plenty of dirt moving, eight man-made lakes and the planting of about 1,000 trees, the result is a gently rolling layout that Weibring hopes will attract scratch golfers to novices.

There are bentgrass tees, fairways and greens with bluegrass rough. The course has 45 strategically placed bunkers, but none that will have to be carried to get to a green. Collection areas around the greens, much like at Weibring Golf Club, are prevalent. There are five sets of tees per hole. The championship tees will measure about 7,100 yards. Cost will be $49 on weekdays and $59 on weekends, including cart, although the course can easily be walked. “It’s amazing for a cornfield,” said Budzius.

The practice facility located near the clubhouse should entice the serious golfer. The driving range, set to open May 4, will have bunkers on the side and a green to simulate what happens on the course. There also is a practice green and chipping area with bunkers. Huge balconies on two levels of the clubhouse provide scenic views of the four lakes by the ninth and 18th holes as well as the driving range and practice area. “It’s really going to attract a lot of different people,” said Weibring. “The type of feel when you come in the front door is what Jim and Carol Ring wanted. They had a vision of what they wanted, and we tried to work with them to deliver that.”

Weibring expects Metamora Fields will be able to draw golfers from as far away as Chicago and the Quad Cities along with those from Peoria, Bloomington-Normal and Central Illinois. Budzius, thinking back to his days growing up, sees another group that will strongly benefit. “When you’re a kid and can jump on your bike and put your clubs over your shoulder and get to the golf course, that’s when you know you’re in a community set for golf,” he said.